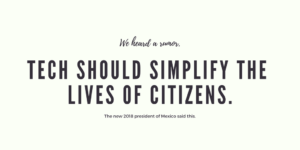 In early July 2018, Mexico gained a new leader, President López Obrador. He is quite interested in information and communications technology and using it to improve infrastructure and quality of life in Mexico. He wants technology to simplify the lives of citizens is requoted by Eduardo Sánchez Hernández, Social Communication Coordinator of the President’s Office and Government Spokesman, at a joint press conference with Coordinator of the National Digital Strategy Yolanda Martínez Mancilla. Get ready for some new influences, too, in Mexico information and communications technologies government sector such as Salma Jalife is appointed the new ICT undersecretary. He was a computer engineer and has a master’s degree in Sciences with a specialty in Telecommunications. Also in early July, Javier Jiménez Espriú, an engineer from the National University of Mexico, became the new Secretary of Communications and Transportation.

Speaking of NAFTA, tech companies, inventors and pundits have pushed for focus on copyright in NAFTA renegotiations since mid 2017. Representatives from the biggest companies like Apple, Facebook and Intel want intellectual property provisions in copyright laws to not encourage lawsuits that lead to “patent troll” cases. L”Patent troll” cases are sometimes what describes lawsuits from smaller technology businesses that hold patents only to earn revenue that way, instead of actually creating and selling products and servicess based on those patents. In other, this might be described as invent, patent, sit and sue.

The 2018 Mexico president even he created a brand new party when he lost his second try for president in 2012. It  was called the Movement of National Regeneration, or MORENA. Because he is so anti-establishment, he’s often been name “Mexico’s Trump,” but the two do not have much in common. President López Obrador is a leftist, not a conservative. His career is politics, not business entrepreneurship. He actually shares his public unlike of luxury and big money. He’ll earn half the salary of previous President Pena Nieto The presidential Los Pinos palace will become a cultural center and not the lavish home of the executive leader. He will sell the presidential plane.